Working as a TEFL teacher in France

How to start off as a TEFL teacher in France:

The most common scenario is for a language school to hire the newly TEFL qualified teacher tentatively for up to 10 hours a week at the start, before offering you more hours when they realise how good you are!

Can Brits work in France after Brexit?

British teachers can still come and work in France without problem for the moment. The UK is now in a transitional period having formally left the EU on 31st January. Consequently, freedom of movement, of goods and finances will continue as before until 31 December. What happens after 1st January next year will be negotiated by the end of the year but teachers in place are unlikely to have to leave. So now is as good a time as any to do the TEFL Toulouse course!

If a language school offers you a contract, it will usually be either short term (“CDD” – contrat à durée déterminée) or if you are very lucky a long term (“CDI” – contrat à durée indéterminée) contract. After doing a few CDD contracts, companies will often offer you a CDI.  As of 2019, tax in France for people on these contracts is now deducted at source, simplifying things a great deal.

Being a freelancer (auto-entrepreneur) and having a CDD or CDI contract:

More and more language schools prefer their teachers to be registered as freelancers (autoentrepreneurs in French see image below). We show you exactly how to set yourself up. It’s very simple – you just register online to be a freelancer and then receive a SIRET (officially recognised business) number. You then just bill the language school or individual student at the end of each job or month, just as a plumber would!

You’ll pay a little more in tax as a freelancer so you should charge more – but you have greater flexibility not least because you can name your hourly fee! Of course if you charge too much some language schools might say “that’s beyond what we can afford”!

And before you ask…yes you CAN work on a contract with a language school and also work as a freelancer at the same time. You don’t have to pick one  or the other.

Here is a screenshot of the online form you fill in to become a freelancer once you get qualified with us. And of course we’ll help you do it. 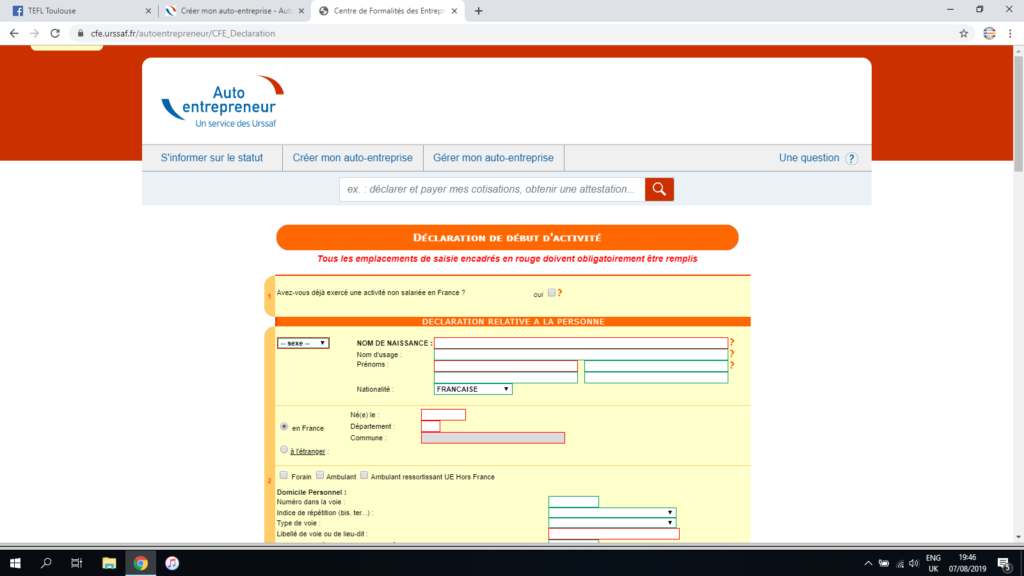 Want to go it alone? Setting yourself up online as a freelance teacher in France

How many language schools will I work for? And will I teach privately too?

Many ex-trainees end up working for at least two language schools (either on contracts or a freelance basis) as well as teaching privately, finding private students through word of mouth or by putting up ads around town.  There are over 30 language schools just in and around Toulouse and a similar number in cities all over France. Some of our ex-trainees are teaching English at Universities in France at up to 60 euros an hour. The catch is that you have to have another contract somewhere else and usually have a year or two experience. So do think about sticking around for that second or third year here – your income may take a leap!

“I’ve just set up as an Auto-Entrepreneur and started sending my CV out. I recently received my SIRET and I’m excited to say that I have landed my first role, teaching professional adults at a language school in Montpellier. This will include small groups, one to one and online lessons. I assisted during an online lesson last week and I’m doing a one-to-one ‘demo’ lesson on Friday morning at a business in Montpellier but officially start in September. I’ve also received interest from 2 other language schools where I submitted my resume so I just wanted to thank you, and all the other instructors, for your patience, guidance, and support. It was a great and worthwhile experience that met all my expectations. I regret not being in the mental space to have given it 100% but I’m more grateful to have made it through and it’s 100% full steam ahead from here on. Thanks and cheers!”Craig South African living in France

When is the main hiring period in France for TEFL teachers?

Language schools in France look for teachers year round. It’s a simple equation: language schools need teachers when people buy their English classes. If you wanted to learn Italian would you only consider starting your course in September? Of course not. But you are unlikely to start on December 20th or in July…

Bear in mind that almost everyone is on holiday from July 14 to the end of August, so there is very little money to be earned then. However, language schools often interview in the summer for the September start, so it is great if you can be around to apply for jobs then.

How long after the TEFL course will I start earning money?

Generally, trainees who stay in France start teaching around a week or two after finishing the course, then build up hours to get a full teaching timetable by around a month later. So you will need some money to survive as you wait for your first pay check. Just teach private lessons to friends and neighbours?

Can I teach English in English speaking countries?

There can be stiff competition for English teaching work in English speaking countries like the UK, Australia, the USA and Ireland, mainly due to the fact that you are competing against teachers who have been teaching around the world for 10 years or more and finally come back home. Summer work can be had though, at language schools like this

How much do TEFL teachers earn in France?

Rates of pay vary – private language schools in France usually pay from 18 to 35 euros an hour gross (you then lose a bit of this on tax), and most people charge about 25 euros an hour for freelance teaching. Remember that there are other factors to consider. 4 block hours at 18e an hour is better than one hour at 35 an hour, and then an hour’s travelling,  and another at 30e an hour. As a rough guideline, most TEFL teachers in France earn between 1500 and 2500 euros a month, depending on whether they do closer to 20 or closer to 30 hours TEFL teaching a week.

Teaching English in France without a degree

Quite a few of our ex trainees are teaching English in France without a degree. Some employers will ask for a degree, others won’t. For example a language school that is looking for a TEFL qualified business English teacher will chose someone who has a TEFL certificate and 20 years of business experience over a 21 year old with a degree from Oxford! Yet they will probably choose the 21 year old for the job teaching 8 year olds! What all language schools do ask for in France is a TEFL Certificate such as ours (rather than an online one).

Working after the TEFL course in France

1Will TEFL Toulouse help me find a job wherever I want to go after the course?
We offer a lifelong job guidance service for teaching English abroad. This means that as well as providing in-depth help setting up in France, we can give you support for the rest of your life, regardless of the location – we have ex-trainees who have taught in Brazil, Korea, Vietnam, China (one 22 year old earning 40,000 euros a year there!) Mexico, Spain, Italy…… just stay in touch after the course. We are always here to help ex trainees.

2Will I be able to find teaching work straight away after the TEFL course? What sort of TEFL work will I get?
On average, our past graduates get some teaching work as little as a week after they finish, and get a full teaching timetable by around a month later. Some language schools offer short or long-term contracts, but we also show you how to set up as a freelancer (auto-entrepreneur in French), as language schools want freelancers more and more these days. Schools will usually start you off with around 10 hours a week to see how you get on, then increase once they realise how good you are! – and you can top this up with private teaching and teaching online.

We also have a lot of ex-trainees who make a living teaching English in their home or gite in France, and some have even gone on to open their own language school. Some are running drama in English in their local French village hall! The sky really is the limit -why not think outside the box?

3How much can I earn teaching English in France?
Language schools usually pay anything from 18 to 35 euros an hour. Often they look for freelance teachers as they need short term work or a last minute teacher. If you set yourself up as a freelancer (auto-entrepreneur – we show you how to do this) – you can name your fee, but the ranges are pretty much as above as to what individuals and language schools are happy to pay. We had one ex trainee who had previously worked in finance and marketing in London who charged 80 an hour!

setting yourself up online as a freelance teacher

Universities here in Toulouse are often looking for part time teachers to cover maternity leave etc , and pay TEFL teachers up to 60 euros an hour. This is more for you after you have been teaching for a couple of years and be careful – they pay up to 9 months in arrears (!) so you need to  have other steady work in the side.

4I'm European. What documents do I need to bring to work in France?
You can just come with your passport as if you were going on holiday. Any paperwork can be done here after the course.

Living and working in France as a teacher and healthcare costs

1What is the cost of living in France? What about eating and drinking in Toulouse?
It’s about the same as in the US or UK, perhaps a little cheaper. Toulouse is less expensive than Paris or London, of course. As a rule of thumb, eating and drinking wine is cheaper, drinking beer is generally more expensive than the UK or USA. Eating out at night in France can be much cheaper than most imagine – a fabulous French dinner with plenty of wine can be had for 25 euros in Toulouse – and for about 12 euros at lunchtime. Street markets are a wonderful French experience! A bottle of wine costs about 4 euros at supermarkets. You can travel very cheaply within France and around Europe using Flixbus

For renting after the course, a room in a shared flat goes for about 300 euros a month, your own little studio for about 500 euros a month. Toulousains love picnicking by the river too when the sun’s out – and it costs virtually nothing! If you want to save even more money, you can pop across the border to Spain and stock up.

2How much is health care in France for Americans?
Healthcare is CHEAP for Americans in France, compared to at home, so don’t fear getting ill. We had an American chap break his ankle last year  while in Toulouse. Total fee including x rays, plaster cast, crutches, several hospital visits.. about 65 dollars. Which they forgot to charge! Just don’t fall over in amazement at the prices 🙂
3What's public transport like in Toulouse?
Public transport is cheap, everyone uses the rent-a-bike scheme, but taxis – which you cannot hail – can be pricey. The number is +33(0)5 34 250250. Try Uber? Toulouse is the perfect size to walk across anyway.