How to teach English grammar in France 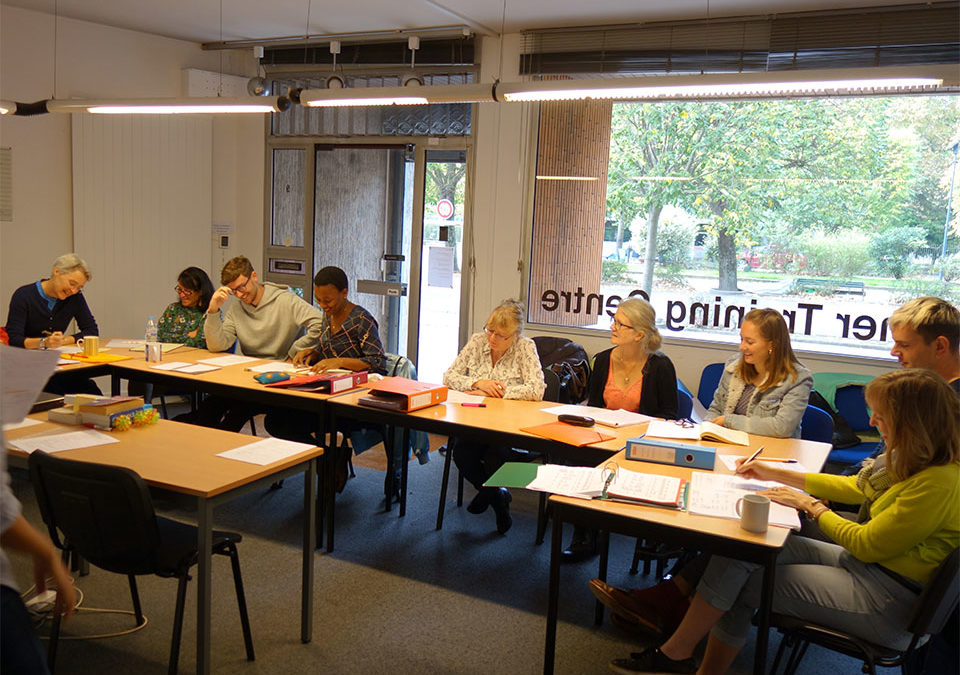 First – a brief history of grammar teaching in TEFL

Teaching grammar – or teaching anything for that matter – used to be a question of the teacher just standing up and explaining it, hopefully using the whiteboard to add some rules that the students can copy down. Language teaching worldwide was done by translating from one’s own language.
The teacher wrote « hier j’ai mangé une salade » and explained that this was « yesterday I’ve eaten a salad ».
Nobody seemed to question the method – after all, that’s what teaching is, isn’t it ? The students should sit down and shut up so that everyone can hear and see the teacher, and concentrate.
But it became clear, nowhere more so than in France, that the students’ spoken English wasn’t improving.
One problem was  that grammar can’t really be translated . « Hier j’ai mangé une salade » is actually « yesterday I ate a salad », not « have eaten ». And half the time «une salade » is a lettuce in French.
Noam Chomsky came into the picture at a critical moment too, claiming that children are already hard wired to learn grammar, and that we naturally form our own hypotheses (why children say “I eated it mummy”) about grammar rules. So perhaps teachers could relax about it all a bit. But the question remained….

How can we improve our grammar teaching in TEFL ? the profession asked

First of all it seemed clear that the students needed to be more involved, and get some speaking practice. The knee-jerk solution was to drill (ie « listen and repeat after me ») the rules and some example phrases. This was called « audio-lingualism ». Most French began to be able to say « Brian is in the kitchen » with fairly good pronunciation now, so things seemed to be looking up.
But the French still couldn’t actually say things they wanted to say, for example ask for directions, or compliment their friend on their new coat. Fast forward to grammar teaching in TEFL in 2022

Leaving the French “education nationale” aside for a moment, grammar teaching in TEFL has come a long way, although elements of these past approaches are still there.

Here are some improvements :

*students not doing the right thing is one of the most common classroom management problems and one that is often easily avoided. With higher levels you can ask questions to make sure they know what to do, eg « OK so is this speaking or a writing activity ? » « Do you do it alone or with your partner ? »

How to teach grammar then ? Here is one fail – proof method :

While French language schools and Universities are now full of TEFL qualified teachers, unfortunately school teaching of English still often resembles the very dated models mentioned at the top of this page.
Even simple concepts such as that of students taking to each other to get maximum speaking practice, are often absent. Lack of encouragement and even criticism of pupils when they get things wrong mean that the French grow up afraid to speak and afraid of making mistakes. Pupils are told to read Jane Eyre or Shakespeare at age 13, rather than graded reading books or magazines about their hobbies. They are also told that being accurate is more important than being fluent when speaking, despite the fact that native speakers make all sorts of mistakes in spoken English, and nobody seems to mind.
Speaking is the French classroom if often limited to getting a student to stand at the front of the class and recite a poem that they have been forced to learn by heart. It’s not uncommon for the child to begin or end this class in tears.
It does seem odd in 2022 that things haven’t changed especially when most French people will admit « on est nulle en Anglais »

Several reasons. One is that French people have historically tended to do French exams in English. Which in turn test knowledge of English, rather than speaking ability. In Southern Europe and South America for example, students have been doing Cambridge exams for years, and these test speaking ability to a great extent.
Protectionism is rife in France, and this includes protecting the French language. Until recently there were even laws preventing too many songs sung in English to be on the radio. So it’s hard to believe that English is very high on the “life skills” priorities list.
Another reason might be that the teachers themselves in secondary schools can’t really speak English. There are very few native-level English speaking teachers in the system. This is because, to become a teacher in France, one must undergo the long and arduous CAPES course. Many native speakers wouldn’t dare to try it, and many wouldn’t want to anyway, as you often get sent to the tough Parisian suburbs for your first job.
The good news is that TEFL teachers are slowly but surely being allowed into the national education system in France. TEFL teachers who can get themselves onto a list of supply teachers can often get in through the back door.

TEFL Teachers to the rescue !

Hopefully you can see now that established techniques for teaching and practicing grammar, found in the TEFL classroom need to spread into the national education system in France.
The essence is student participation, speaking time and asking questions rather than lecturing. TEFL Toulouse is looking forward to getting involved in the education nationale system, observing and providing feedback to existing language teachers.
Be part of that revolution  with TEFL Toulouse !